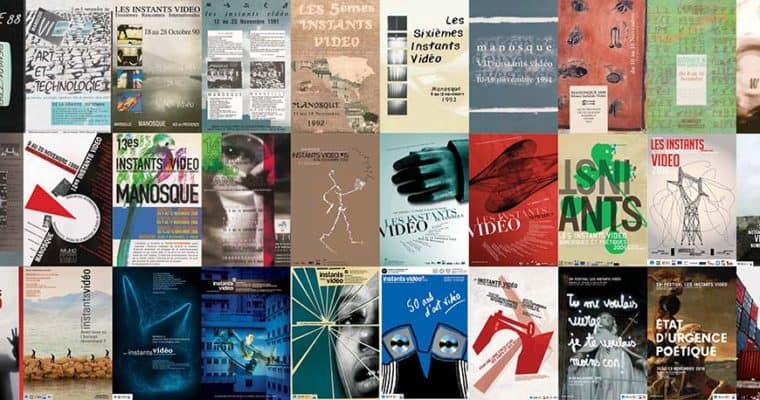 Posters of the 30 editions of the Festival Istantes Vidèo , from 1988 to 2018
ABSTRACT The videoart production has never known a systematic and capillary distribution comparable to that of film and television, rare distribution companies (Elecronic Arts Intermix, Video Data Bank, etc), willing to circulate the video works produced by artists. For the electronic arts, festivals and exhibitions were in fact, starting from the seventies, and not only in Italy, the only opportunities for dissemination, knowledge and debate: the Festival as space and time of vision, contemplation and individual and collective experience. Marc Mercier, director of the historical festival , Les Instans Vidéo, presents a selection of videos coming from the last edition of the festival, entitled Nos désirs font désordre.

A contemporary Dutch landscape with five windmills.
Next to energy, windmills also produce noise. And at the end of this video we are likely to be in sort of a “ hell of noise “ , where a contemporary Don Quichot will probably give up his struggle against the windmills after something like five minutes…….
For the sound I manipulated the original sound with the help of Audiomulch.

Video based on a text by José Luis Brea: RAM_city (1000 screens), part of the book cultura_RAM. Mutations of culture in the age of electronic distribution.
It is the transition from a city with “Read-only memory” (ROM) to a city with “Random-access memory”: RAM_city. From a “file based memory” to a “network memory”. From a “storage memory” to a “factory memory”.
In this new city there are no monuments or heroes to commemorate. The history of this city is not made up of individual moments despotically imposed, ensuring their presence into the present. Here, nothing crystallizes as a fixed memory. It is a continuous exchange, a permanent awakening. Culture is not marked by tradition and inheritance rules, nor by the need to follow the same canon.
In RAM_city everything is disagreement, there is nothing to be concluded as real. The formation of the imaginary is a continuous and open negotiation. Not between individuals and the state, but among the units of work, performance and exchange.
In the words of Brea: “There is no other “sociality” than this one: occasion and leakage, drift and flow, meeting and rapid dispersion– continuous Big Bang “.

The Scarecrow is my mirror, full of characteristics and roles that fill all the moments of my everyday womanly life. “The Scarecrow and Me” is built by the others, always with a role saved for us. The guardian of the Earth and fertility for me and the scarecrow, and the guardian of husband, child and family life for me alone. We’re both destined to guard something, and this brings us stagnation, and stagnation brings us depression and lethargy. The scarecrow and me, we’re full of paradoxes. Sometimes we love, sometimes we don’t, sometimes we laugh, sometimes we don’t. Sometimes we just stare into the distance, and a deadly routine surrounds our every moment. Sometimes we think of putting up a fight, with ourselves, with another or the others, with traditions that enchain us, with womanly routines, with all the commodities circling us. But now, we’re not just thinking, because we’ve been called to arms, we’re called to move, to act, to go… regardless of all these things that enchain us.

In Ettadhamen City (Tunis), Moufida Fedhila films the children through a minimalist and expressive performance. They read, cut, fold and shape the daily and infinite newspapers that arouse a stream of information and stories.
Between the news of the world and the game, the escape is total, the horizon is infinite and the dream prevails. Like a Little Prince from one planet to another, each child will make his own crossing by reinventing the difficult daily life of their neighborhood.

In a street of Ramallah, a traffic policeman dances among bulls of metal.

Chic Point is a seven minute video that ponders, imagines, and interrogates “fashion for Israeli checkpoints.” Set to the backdrop of a heavy rhythmic beat, men model one design after another in an exploration of form and content. Zippers, weaved nets, hoods, and buttons serve the unifying theme of exposed flesh. Body parts – lower backs, chests, abdomens – peek through holes, gaps, and splits woven into readymade silk and cotton t-shirts, robes, and shirts. Raw materials and standard clothes are transformed into pieces that follow normative fashion standards while calling them into question.
As the sights and sounds of the fast paced catwalk dim to a close, the viewer is transported to the West Bank and Gaza. A series of stills taken from the years 2000 to 2003 display Palestinian men traversing the profoundly violent but highly common Israeli checkpoint. One man after another lifts shirts, robes, and jackets. Some kneel shirtless, others naked, with guns poised at their exposed flesh. Men in Jenin, Ramallah, Bethlehem, Kalandiya, Jerusalem, Hebron, Nablus, and Gaza City wrangle with the Israeli state’s security apparatus.
Chic Point brings these two locations together in a reflection on politics, power, aesthetics, the body, humiliation, surveillance, and chosen as opposed to forced nudity. The world of high fashion is an interlocutor for the stark reality of imposed closure. The body of the Palestinian, today commonly understood by the Israeli state as a dangerous weapon, is brought to the viewer’s eye in the flesh. Chic Point bares the loaded politics of the gaze as it documents the thousands of moments in which Palestinians are daily forced to nude themselves in the face of interrogation and humiliation, as they attempt to move through the intricate and constantly expanding network of Israeli checkpoints. 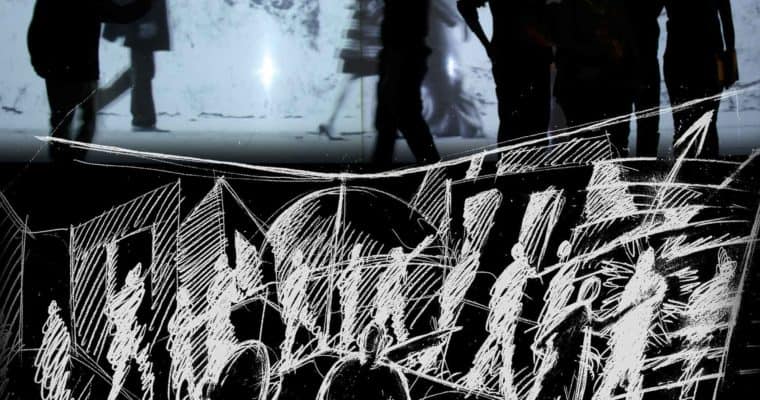 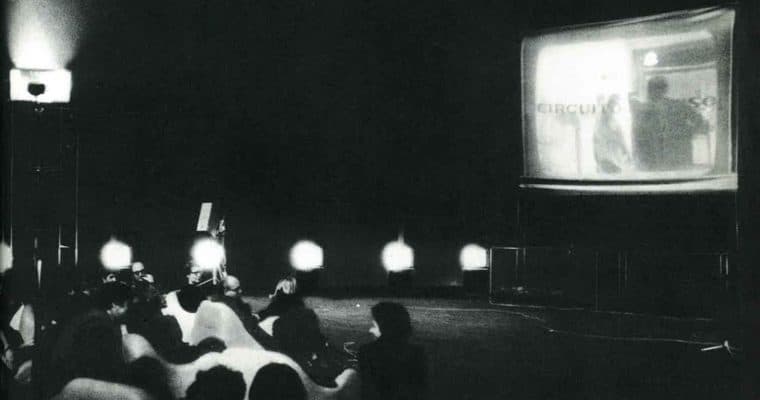 This article is available in ITA 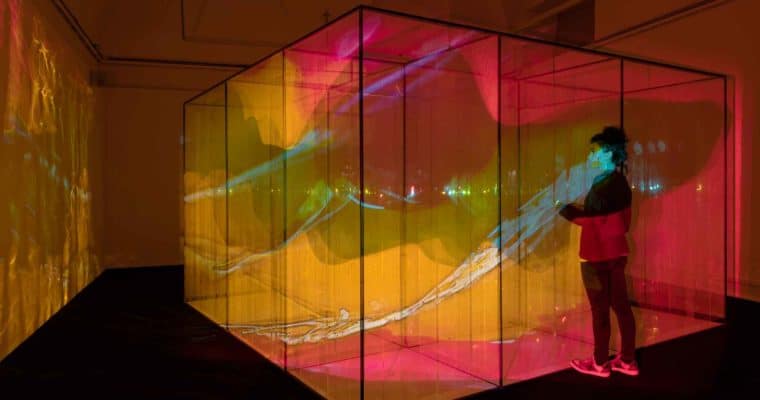 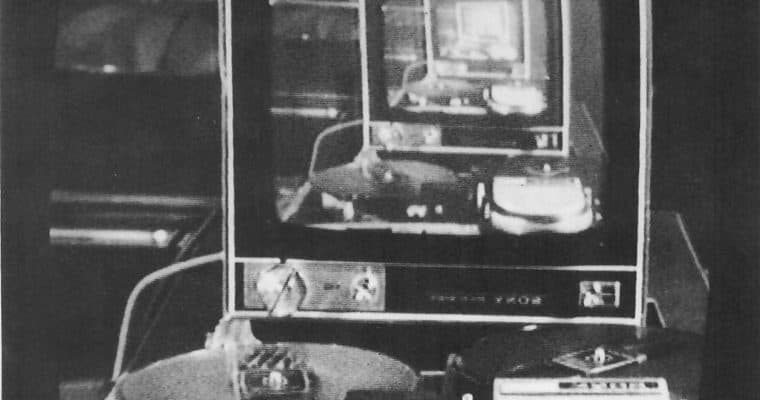 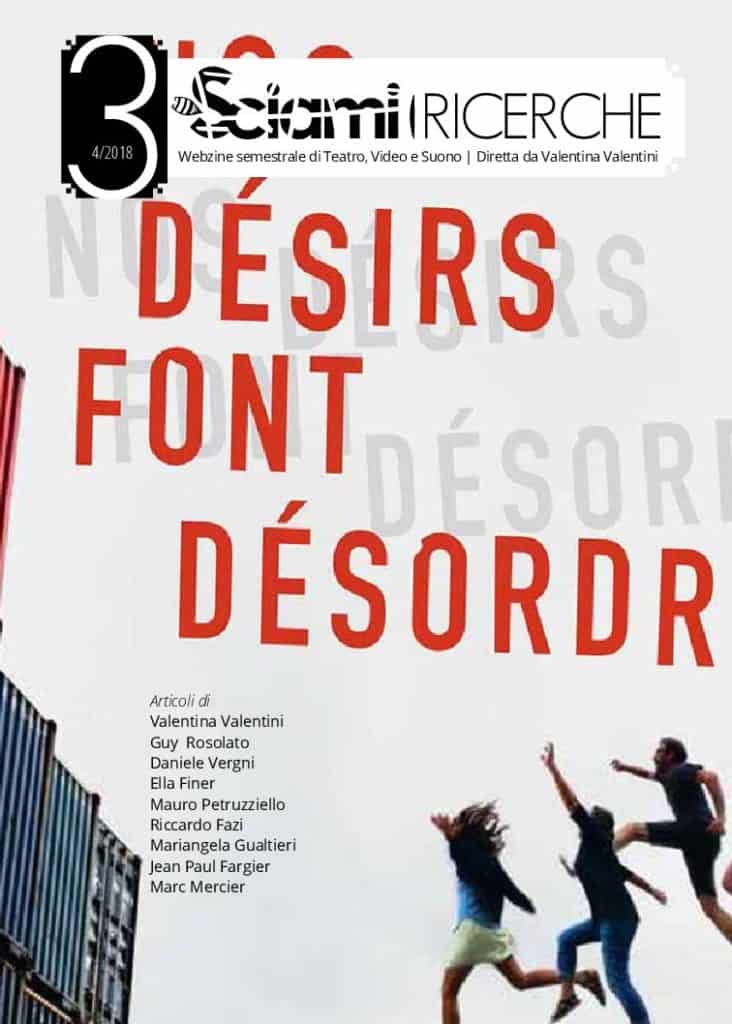